This is an exciting week for me and James, as we have gotten our tool, Offbott, to the minimum viable prototype stage and introduced it to the Lighthouse team this afternoon.

Offbott (your mostly-friendly office bot) is a tool for collecting thoughts and insights that often get lost when working on long term projects. While there’s a plethora of tools for organising, planning and managing teams and processes, there aren’t many successful ones for capturing these processes as they happen, or for reflecting upon them once they’re over. While sometimes these things are recorded through blogging, that’s only true of public-facing projects – and some things can only be spoken about between team mates. There are things you might think about and not consider them useful or significant to record, but together they make up a story of the process that provides a rich insight into the project and the team. One of the aims of Offbott is to help communicate better how the organisation works to external stakeholders; but seeing these thoughts collected over time could also be a catalyst for improvement.

Once a day, the Offbott will email you to ask you how you’re doing. You don’t know when the email will come in. By prompting you out of the blue it tries to catch you slightly off guard, so you record the first thing that comes into your head. There is no set reply format. You’re free to tell it about your whole day, the last five minutes, or your plans for later. You may choose not to reply at all.

It will then gather updates from all team members on the project into a timeline of thoughts, a kind of Twitter for offices. At the end of the project you will be able to see patterns emerging: which things kept being mentioned, where the difficulties have caused frustration, which parts were easiest and most fruitful.

Offbott is not intended to gather data on individual’s performance. In fact, it tries to stay away from office politics – there is no hierarchy built in. It demands trust from everyone involved: every team member can edit the project or add new team mates.

We’ve only just began using it with the team here at the Lighthouse, but we already have lots of ideas how we could improve it and take it further – including opening it up to the public. It feels like we have been so busy trying to get it to this stage that we barely had time for anything else! Next time we talk about it we should have some feedback from our hosts, maybe they can even be convinced to write a little bit about it too. 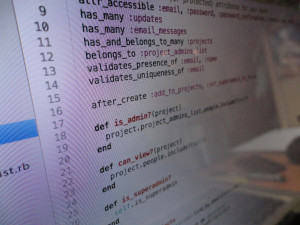 Offbott is built in Ruby using Ruby on Rails